BENAPOLE: Boro farmers' dreams have been shattered by the blast disease in their paddy fields at Manirampur upazila of the district like previous years.

Many farmers have lost their way due to blast disease in the field just before the ripening of paddy.

Maximum farmers have been affected by cultivating BRI-28 and Miniket rice. Their dream of a good harvest has faded away.

Even after applying various types of pesticides, the farmers are not getting any remedy. They are being forced to cut raw paddy finding no other way.

Farmers complained that no advice from the agriculture office was available at the moment and field officials did nothing to help them.

On a visit to Rohita, Sheikhpara and Raghunathpur fields of the upazila, several fields were seen destroyed by the blast.

Besides, sporadic blast attacks have been reported in Kashimnagar, Debidaspur and other areas of the upazila. The Upazila Agriculture Office was quite unaware of the blast disease.

Azgar Ali of Rohita Sheikhpara village said, 'I have cultivated BRI-28 on one bigha of land. The paddy has started to ripen. From 8-10 days ago, the sheaf of paddy is turning white.

Applying pesticide did not cure it. The yield of Bri-63 variety of paddy is 25 mounds per bigha. I doubt if there will be five mounds in my land. '

Azgar complained, 'I never get the local agriculture officer's help . Seeing the bad condition of the paddy, I ran to the pesticide shop. I bought some poison as per the shopkeeper's advice. But it doesn't work. '

Abdul Ghaffar, a farmer from the same village, said, 'I have cultivated 1.5 bigha miniket paddy.

At the moment of ripening, the insects are cutting from the bottom of the sheaf.

I sprayed pesticide. But it didn't work. Not finding any other way, I have already cut ten kathas of paddy.

Rahatullah, a farmer of the Rohita village said that two bighas of his paddy land have already been destroyed by blast. He is also cutting paddy.

Ten kathas of Khokon and 15 kathas of land of Mujibur Hossain of Mahmudkati village have been destroyed in the Boro paddy blast. Meanwhile, a recent gust of wind over Manirampur has damaged the sheaf of Boro paddy in different parts of the upazila.

According to the Upazila Agriculture Office, boro has been cultivated on 26,500 hectares of land in Manirampur upazila this time.

Rohita Union Agriculture Officer Tuhin Biswas said, "There are no blasts in my area this time. I am always on the field. I give necessary advice to the farmers. If a farmer doesn't report crop problems, it's not my fault! '

Manirampur Upazila Agriculture Officer Abul Hasan also claims that there is no blast. He said no blast attack was seen in Boro paddy anywhere in the upazila.

Scattered winds have dried up eight hectares of paddy fields.

Our Sylhet Correspondent adds: Harvest of Boro paddy would begin in full swing in two weeks in all the 4 distrcts of Sylhet division. However, harvest of some early varieties have already been started in places in haors, locals and officials said.

The DAE expects 1938,000 mt of rice to be produced in the division as 483,700 hectre as were used for Boro farming. Due to inclement weather there had been reports of dried up crops (chita) from places, however, it is too small.

Meanwhile, some locals are now apprehending a shortage of labourers since a good number of poor people had left their homesteads after the last year's devastating crop loss by the unprecedented rains and floods.

On the other hand, thousands of labourers from other districts like Cumilla, Rangpur Mymensingh etc come for seasonal job of Boro harvest in Sunamganj and neighbouring districts. They had the scope to earning a good quantity of paddy in labour cost or in cash. Even sometimes many of them were given advance remuneration months ahead of the season.

But due to creation of local jobs, most of them are not coming this year while there has been a local crisis too, a number of people said. 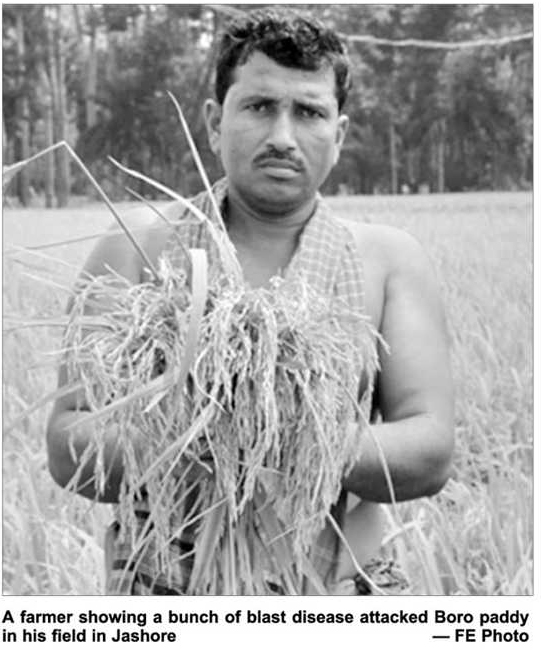 Sunamganj Deputy Commissioner Jahangir Hossain at a press conference yesterday said that they had arranged bringing some labourers groups for the district soon for ensuring early and timely harvest as there are risks of early rains.

Habibur Rahman of village Radhanagar in Derai upzila said that he would begin harvest in a week. But, in the absence of labourers he had to hire a group of 15 people from Balaganj upazila of Sylhet at much higher rates. Mainly the large farmers apprehend harvest would be affected due to early rains or any calamity while required labourers were not available in time.

On the other hand the DAE's additional Director, Sylhet division Dilip Kumar Audhikary admitted shortage of harvest labourers this season. The farmers should arrange harvest as soon as possible, this is why they need many workers almost at a time.

The official meanwhile said we had arranged some mechanized harvest equipment for the lower region at lower prices. A Combined has been given at highest 70 per cent subsidy for the less privileged areas like haor region, he added.

Our Netrakona Correspondent says, farmers in the lowlands, including 134 small and large haors in Netrakona district, have started harvesting ripen Boro paddy for a week. Although Boro paddy has started to be harvested, 86 per cent of the land is still left.

If the weather is favourable, harvesting of paddy in Haor will be completed by mid-May. However, in the Boro paddy threshing festival, the farmers are filling the paddy fields with Gola. They are happy that the bumper yield and price of the crop produced are as per their expectation. Many are selling their produce at home as well as at the market.

Farmers in Haor are a little bit worried because of the global coronavirus epidemic and two natural disasters. The businessmen said if the bank is not open, it will be difficult to transact money. As a result, they will be in trouble to buy paddy. Besides, many wholesalers are buying extra paddy in the coming days due to the fear of food crisis in the situation of severe lock-down.

Bargaining and trading of buyers and sellers is going on in the hats. Farmers are taking their paddy to the haats by Bhatbati, mini trucks, vans. They are selling at expected prices to retail and wholesale buyers. Many wholesalers and retailers are trying to give money to the farmers before the price of paddy is fixed in the market.

It is learnt that new paddy is being imported from about three upazilas of the district. In Haor of Mohangonj, Modan and Khaliajuri hundreds of thousands of tonnes of paddy are being imported in hundreds of trucks due to good communication system. There are about a hundred paddy warehouses in the market and haor .

Abdul Karim, a farmer from Tentulia village in Mohangonj upazila, said, "Boro paddy is being sold at Tk 880 to Tk 900 per 70 kgs. " This year he has planted 10 bighas of boro paddy. So he has threshed paddy and sold 300 maunds of raw boro paddy. He is happy to get the fair price.

Mohammad Ali, a farmer from Kamalpur area of the upazila, said, "I have sold 50 maunds of boro paddy this year." He said that he is benefiting from the good price. If the weather is right then I will be able to harvest in Haor beautifully.

Abul Hashem, a wholesale paddy trader at Tatulia Hat in the upazila, said the owners of auto rice mills were buying more paddy.