The government likes to go for further trial of vannamei shrimp culture to understand its prospect in Bangladesh before permitting commercial production while exporters look eager to tap a prospective export boom.

They say Bangladesh' black-tiger species of shrimp has lost competiveness in key western markets like the United States and the European Union. 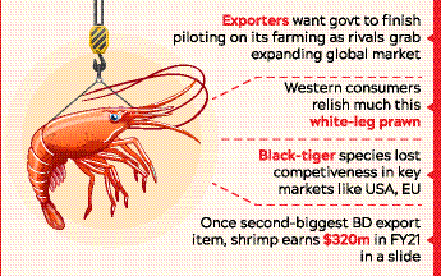 One project was run by M.U. Sea Foods Ltd at the saline water centre of Bangladesh Fisheries Research Institute (BFRI) in the coastal Paikgachha upazila of Khulna. It launched cultivation on March 31 and harvested its first crop in July this year.

The other one, Agribusiness Enterprise Development and Services, could not so far start its piloting in Cox's Bazar coastal area.

Azizul Haque, director (inland) of aquaculture at the DoF, said only one trial had been done, which was not enough to make sure the prospect of such a new variety of fish in the country.

Besides, it is also necessary to make sure that the local variety and the environment would not be harmed by this species, he mentioned.

"So, we would go for at least 2 to 3 more pilot protects before the commercial production," the DoF director said and added that a technical committee was working for that.

They have received four applications, and they would select viable farms among them for piloting.

When asked, he said they were examining the report of the first crop of M.U. Sea Foods Ltd. "But the company needs to culture two more crops to get final result."

However, frozen-foods exporters sought commercial cultivation of the white-leg prawn as soon as possible, as they claimed that the pilot project of M.U. Sea Foods Ltd successfully completed.

To this end, the Bangladesh Frozen Foods Exporters' Association (BFFEA) formally requested the government to allow farming of the hybrid shrimp.

The association said in its letter that the project of Paikgachha made a good success. It produced 8.62 tonnes of vannamei shrimp per hectare.

It also said they had sent a report to the DoF, in this regard. The inspection committee of the DoF also visited the project and submitted their report.

Talking to the FE, BFFEA president Amin Ullah said vannamei shrimp was produced in a semi-intensive method through maintaining bio-security.

So, there was nothing to worry about environmental damage or harmfulness for local species. On the other hand, the whole farming process had been monitored by the DoF, he added.

"We didn't know why the authorities concerned were lingering the issues," the BFFEA chief said, adding that the sector was facing an acute crisis of exportable fishes.

He said currently, vannamei is a leading item on the world shrimp market because of its affordable price and the country's shrimp exporters have been demanding for long inclusion of the hybrid variety of edible crustaceans in their export basket.

More than 60 countries are producing vannamei, which meets about 80 per cent of total shrimp demand in the globe, he mentioned.

Bangladesh exports only 2.0 per cent of the international demand for frozen shrimp, according to the Bangladesh Shrimp and Fish Foundation (BSFF).

Exporters say they incurred huge losses as Bangladesh's black-tiger species lost its competitiveness in key global markets like the United States and the European Union (EU). If they want competitiveness, vannamei production is indispensable.

The country once boasted 110 frozen-fish factories occupying the second position among the total export-oriented sectors even a decade ago. But the number has come down to as low as 30 to 40 at present.

Unavailability of exportable fish, especially shrimp, on the local market is the key reason behind this worst situation in the industry, insiders said.

MRP of soyben oil increased to Tk 160 per litre

Prices of essentials, vegetables yet to go down

MRP of soyben oil increased to Tk 160 per litre