Bangladesh market sees highest number of IPOs in a decade

Private companies have offloaded primary shares worth Tk 10 billion in nine months during January-September 2021, the highest amount in a decade, amid virus-induced sluggish economic activities.

This is the highest fund collection through IPOs since 2011, when six companies and five mutual funds raised an aggregate amount of Tk 16 billion during the period under review, according to statistics with the Dhaka Stock Exchange. 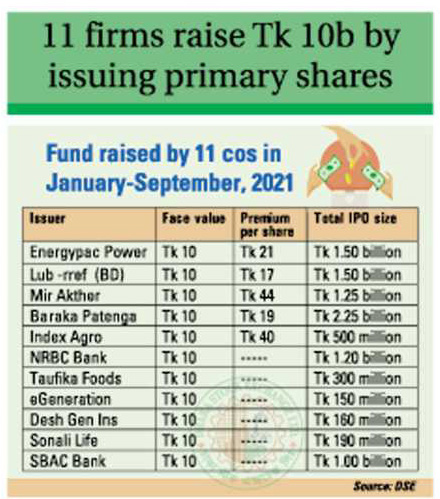 Battered by the Covid-19 pandemic, market insiders said, the companies raised such huge amounts of funds on expectations that it might help stimulate their business strength in the post-pandemic period.

Most part of the funds is meant for business expansion, repayment of loans and meeting the working capital requirements.

Moreover, the outlook appears to be bullish for the remaining part of the year as some companies, including Sena Kalyan Insurance and ACME Pesticides are set to launch their initial share-sale offers in the next month.

"We are now starting to see even bigger size IPOs hitting the market. On an overall basis too, pipeline looks promising," said a stockbroker.

"We want to make the market vibrant through bringing new issues with good fundamentals," Rezaul Karim, spokesperson at the BSEC said recently.

The process of IPO approval has been made faster and easier too, he said. "The new issues will strengthen the market as well as the economy".

Making the secondary market vibrant is one of the key factors needed to create scopes for the new companies to raise funds through IPOs, said Dr AB Mirza Azizul Islam, a former adviser to the caretaker government.

Mr Islam, also a former chairman of BSEC, said the companies having good fundamentals and reputation should be allowed to be listed to enhance the market depth.

He also stressed the need for bringing state-owned enterprises to further strengthen the market and make it efficient.

Some market experts, however, said the regulator to be cautious about the unscrupulous companies that tend to take advantage of lax IPO rules and regulations. They suggested doing proper valuation and scrutiny of the IPO proposals before approval.

The country's capital market also posted a significant gain during the period under review despite pandemic.

With the inclusion of the new issues, the market capitalisation of the prime bourse also rose by Tk 1,288 billion to Tk 5,770 billion on September 23, 2021.