Commerce Minister Tipu Munshi and others including the recipients of the 22nd ICAB National Award at the award giving ceremony organised by the Institute of Chartered Accountants of Bangladesh (ICAB) at a city hotel on Saturday evening.

Listed and non-listed banks, non-bank financial institutions and other entities representing 16 different sectors were handed over the awards at a ceremony organised by the Institute of Chartered Accountants of Bangladesh (ICAB) at a city hotel on Saturday evening. 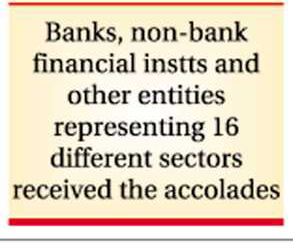 and Chairman of the Financial Reporting Council, Bangladesh Hamid Ullah Bhuiyan were present as special guests.

He also lauded the introduction of the Document Verification System (DVS) as it helps the BSEC to know better about a company.

Hamid Ullah Bhuiyan said soon auditors will be required to be enlisted with the FRC to do the auditing as there is a move to make it mandatory.

He suggested that the auditors should follow all the standards of the FRC and other related organisations.

Apart from recognising the first, second and third positions in each category, 17 entities were honoured with the "Certificate of Merit" upon achieving minimum threshold scores.

Among all, Bank Asia Limited became the over-all winner. An 11-member Jury Board chaired by Dr Atiur Rahman, former governor of Bangladesh Bank, reviewed the recommended lists of the winners.

During the year, ICAB-RCPAR received annual reports from 88 entities.

Award for the Agriculture category could not be considered because of scoring lesser than threshold marks by the participating entities.

From the winning companies, three best annual reports under each sector will be nominated by ICAB to the SAFA BPA competition next year in recognition of their excellence in financial disclosure.

Only Eastern Housing Ltd received certificate of merit in the category of infrastructure and construction.

Only Unique Hotel and Resorts Limited received certificate of merit in the category of service sector.

IMF sets floor for net forex reserve at $24.4b for June