Ten bridges are lying useless on a Netrakona road while Cox's Bazar villagers crossing a canal using a bamboo-made bridge for a century now. Reports of such rural communications hardship came from the two districts in a row, amid news of dilapidated roads and bridges in many other parts of Bangladesh galore.

Our Netrakona Correspondent reports: The approaches to ten bridges have disappeared for lack of road repairs. The bridges are of no use to the public now. Although most people have stopped using this road, the people of some villages are forced to travel through it in extreme misery.

It is learnt that about 06 kms of the 10-km road from Vaishyabari in Madan Municipality to Fatehpur Dewanbari are unpaved. Although a portion of the road that is under the jurisdiction of the municipality is paved, it is in a sorry state. There are 10 small and big bridges on the 06-km kutcha road. The road has not seen any development for more than two decades. The soil of some of these bridge approaches has been washed away. People are now using bamboo bridges discarding the concrete ones.

Once, thousands of people from 20 to 25 villages of the upazila used to travel on this road every day. Due to the dilapidated condition of the road, most villagers have stopped treading this path.

But, as there is no alternative road to these two villages of Madan Union, Fekni and Madhupur, people of all ages, including students, are travelling every day through it amid the misery. Moreover, the people of Bagjan, Baithakhali, Bhabanipur and Tiyashree villages of Tiyashree Union are also travelling this road. Six kilometres of the road have become unfit for traffic movement.

Shah Alam, a college student from Fekni village, said, "The people of our two villages have no road for communications. When the election comes, people's representatives give us assurances. Election over, they forget the promise. Broken roads remain broken. Ten small and big bridges on this road are useless.

Locals said that "if the authorities had repaired the road, thousands of people would have been able to travel through it".

Tiyashree UP Chairman Fakhar Uddin Ahmed said, "Three bridges in Tiyashree Union have become useless as there is no soil at the approach. The road has not been repaired for a long time and people are unable to travel through it. I will take steps so that people can move."

Madan Sadar UP Chairman Badruzzaman Sheikh Manik said, "Fekni and Madhupur are two neglected villages in my union. There are roads but the people of these two villages are suffering for a lack of repairs of the roads. I will talk to the authorities about this and take action."

Upazila Engineer Md. Golam Kibria Pial said, "I have heard about the problems of bridges after joining Madan Upazila. I will take action in this regard after a spot visit." 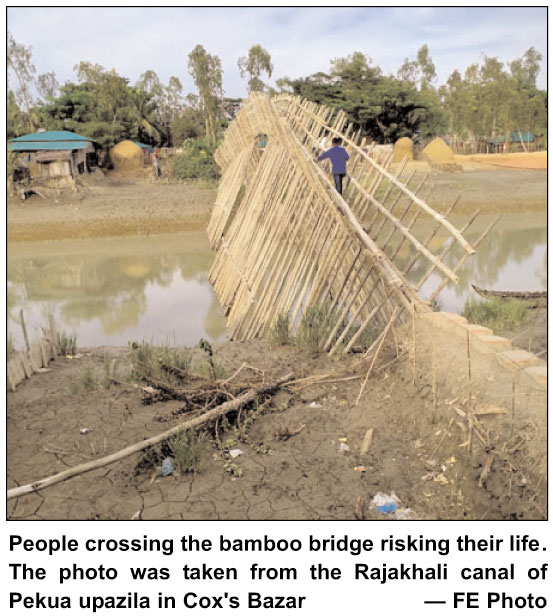 A Correspondent from Cox's Bazar reports: People of Rajakhali and Taitung unions of Pekua upazila close by the canal have been suffering for almost 100 years.

The bamboo-made bridge is the only means of transportation for more than half a million people in the two unions. More than 2,000 families live on both sides of the canal.

Nurul Basar, president of the social committee of the area, said, "We have been living on the other side of the canal with more than 2,000 people. It is very difficult to cross the canal over this bridge in the rainy season.

"Since there is a graveyard on one side, if someone dies on the other side they have to float the body on the canal and take it to the graveyard. The people have endured this suffering for almost 100 years."

Ahmed Kabir, a local resident, said, "We have been suffering from this problem for many years. It is very difficult for a patient to cross the bridge. When it rains, little boys and girls can't go to school safely.

"Although public representatives gave us various assurances before the election, they did nothing after the election. Leadership changes, the bridge doesn't."

School student Tofail Ahmed said, "We are facing a lot of troubles in passing over the bridge. Going to school becomes risky if anyone moves a little carelessly on the bridge. On many occasions, books also fall into the canal."

Jahedul Islam Chowdhury, chairman of Taitung Union Parishad, said, "Before election, we, the people's representatives of the two unions, promised the people to build a bridge over the Haji Para canal, but we could not keep the promise for various reasons. Our MP Zafar Alam also promised to build a bridge in the area but nothing tangible has been done.

"When MP Zafar's attention was repeatedly drawn in this regard, he visited the bridge area on several occasions and again promised to build a bridge over the Rajakhali canal at Haji Para."

Local UP member Nurul Azim said the construction of a bridge at this junction would reduce the distance between Chattogram and Cox's Bazar. On the other hand, it will be possible to reach the destination an hour ahead.

‘All canals under DNCC to be recovered according to GIS map’

Bangladesh's import tax revenue rises on the back of higher rate