The mental health status of the students especially at the country's universities has taken a turn for the worse with 84.6 per cent suffering from mental depression during the Covid-19 pandemic, according to a survey.

It showed that mental healthcare was largely ignored among the students due to an inadequate number of mental health professionals in Bangladesh. Uncertain future, loneliness, fear of death because of Covid-19, session jam, unwanted pressure for marriage were also blamed for such a situation, it added.

Aachol Foundation conducted the survey on 2,552 students and released the findings on Saturday, marking the World Mental Health Day that falls on October 10. 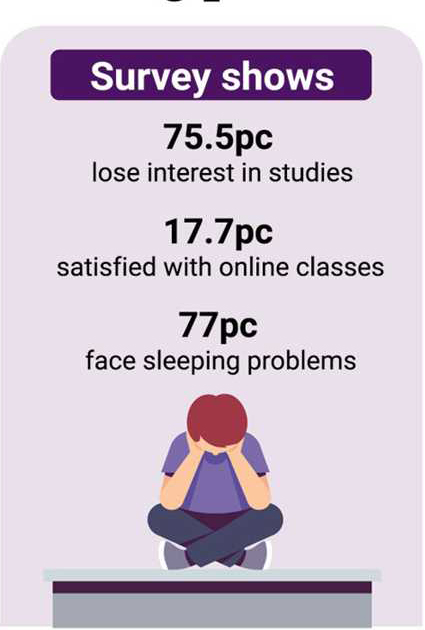 The initiation of online classes had led to a considerable increase in screen time where the students had to sit in front of a computer or laptop most of the time. It also found that 98.3 per cent of the students faced different problems such as decreased memory power, headache, dripping eyes, lack of concentration and sleep.

Aachol Foundation's founder president Tansen Rose told the FE that they had recently conducted another study where they found that many university students were facing mental problems with many of them showing suicidal tendency.

Depon Sarkar, a psychologist, said the closure of educational institutions in the country has resulted in decreased communication with friends. "Regular study along with career and personal life was affected seriously, thus resulting in the consequence of their mental sufferings," he added.

He also said the students should get counselling regularly from mental health specialists.

Jobeda Khatun, assistant professor and chairman of Clinical Psychology Department at Dhaka University, told the FE that a large number of students suffer from mental depression mainly due to the changing lifestyle during the Covid-19 pandemic.

"The changing sleeping schedule is another big cause of mental depression among the students. It affects both physical and mental health," she mentioned.

"Our department has already provided mental healthcare support to over 900 people including students through online campaigns. Many health service seekers are still on the waiting list. It means a growing number of people are facing mental health issues during the pandemic."

She added: "Sharing mental problems or seeking mental healthcare still remains a stigma in our society. We need to address the issue and launch an awareness campaign, involving our community leaders at grassroots level."

She said, "We have to provide the students with mental health education from primary schooling aiming to bring about a sustainable change."

The government should provide registration to all valid psychologists in the country in order to avoid 'fake' treatment, she suggested.

How worried should we be about the Omicron variant?

No need for Covid booster doses in Bangladesh at this stage, say experts