Bangladesh's per-capita foreign debt ballooned to USD460 or Tk 39,000 in the fiscal year 2021, up by over $67 from the figure a year before, according to central bank statistics.

Such a buck in external debt derives from a rise in the total external debts of the country in the year under review -- a time when there had been great disruptions to economy and finances worldwide while extra needs for combat against the pandemic were created.

The Bangladesh Bank in its latest publication shows that the country's total external debt stock stood at $78.04 billion at the end of last June, or up by nearly 19 per cent in the fiscal 2021. This is equivalent to 22 per cent of the country's GDP [gross domestic product]. 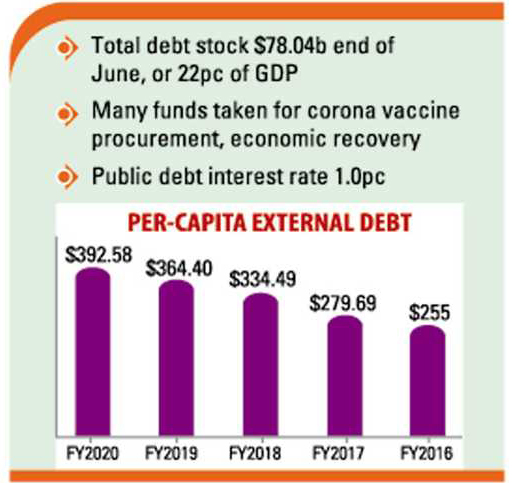 However, Finance Minister AHM Mustafa Kamal, while replying a question in parliament recently, cited the figure of per-capita foreign borrowing as Tk 24,890. He was replying to a query from ruling Awami League lawmaker Didarul Alam from Chittagong-4 in September.

Some people at finance division said that the finance minister's reply was based on previous year's debt position.

They said that, according to data available with Bangladesh Bureau of Statistics, the total population of the country is 169.31 million. By that account the per-head foreign debt was $292.11 or Tk 24,890.

Of the total stock of the external debt at $78.04 billion, some $64 billion accounts for long-term borrowing while $14 billion for short terms.

The Bangladesh Bank data show that there is inverse characteristic between the long-term debts and the short-term ones in the last fiscal year.

The short-term debts increased by 18 per cent in the past fiscal year against 15 per cent previously while the long-term debt rate declined by 2.0 per cent to 82 per cent in 2020-21.

Economists believe that the rise in the external debts is due to the coronavirus pandemic that upended normal order and activity. They argue that Bangladesh received a big chunk of debts from the development partners, including the Asian Development Bank, to meet emergencies.

The rapid buildup was mostly driven by urgent government needs. There were many funds the government availed for corona vaccine procurement and economic recovery.

Private-sector external debts were also on the upswing. The public-sector debts stood at $59.3 billion at the end of June while the private sector's at $18.7 billion.

The external borrowings are much cheaper than the local sources. The local enterprisers cash in on the cheap loan for meeting import-related cost, like buyer's credits or deferred payments.

Dr Zahid Hussain, a former lead economist at the World Bank, told the FE that this is still tolerable but it may be a burden if not utilised properly.

"There is now need to give attention to productive use of the debts in order to avoid risks relating to repayment."

PM encourages youth to be entrepreneurs

Emphasis on sustainable and equitable growth, not a rapid one