Speakers at a programme on Friday urged the government to follow bottom-up approach while framing any policy to make it inclusive and representative to all citizens. 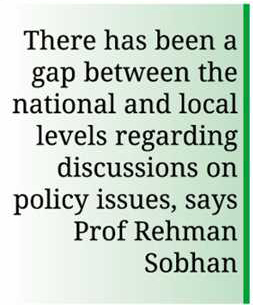 They also observed that development needs at the local level are often missing in the plans adopted for national development which makes it difficult to reach the benefits of development to underprivileged communities of society.

Their call and views came at the "Public Hearing: National Development and Local Realities" organised by Citizens' Platform for SDGs at Krishibid Institution auditorium in the city's Farmgate.

Minister for Local Government, Rural Development and Cooperatives Md Tazul Islam addressed the event as the chief guest and former Minister for Cultural Affairs Asaduzzaman Noor as the special guest.

Member of the Parliamentary Standing Committee on the Law, Justice and Parliamentary Affairs Ministry Rumeen Farhana also spoke at the programme presided over by Centre for Policy Dialogue (CPD) Chairman Professor Rehman Sobhan and moderated by convener of the Citizen's Platform for SDGs Dr Debapriya Bhattacharya.

Professor Sobhan observed that there is a pre-existing dissimilarity in the discussion on development agenda at the national level in comparison with the expectations from local level.

There has been a gap between the national and local levels regarding discussions on policy issues, Professor Sobhan said adding: "The points that are discussed at grassroots level more often don't reflect at the national level discussions table."

It is the government's duty to collect opinions from grassroots level to find what people are thinking at the community level, he emphasised.

He suggest finding out why the voice from local level remains absent for years in the decision-making process of the country.

It is imperative to remove the gap between local government institutions and central government to make the state decision publicly inclusive, he opined.

Chief guest at the event, Mr Tazul, said due to advancement in technology, thoughts of general people easily reach the high level of the government.

With increase in the literacy rate from 60 per cent to 90 per cent, per capita income of the country went up significantly, he noted.

Referring to the benefits of the community health clinic project taken under the Awami League regime in 1996, he said these clinics in grassroots level have been playing tremendous role in ensuring basic healthcare in rural Bangladesh.

He urged everyone to step ahead to address the issues related to corruption to make the development inclusive.

He added the income of people has been increasing in an uneven way because the impacts of developments are not benefitting all equally.

There has been a deficit in decent works for the country's youth and under such circumstances, inflation negatively impacted many families regarding food security, he said.

Besides, the country needs to concentrate more to prevent violence on women, environment pollution, etc for sustainability of the country's development.

To continue the country's progress, Mr Noor recommended that all should work in a coordinated way leaving no one behind.

Bangladesh reserves to fall to $30bn in FY23 before bouncing back: IMF

Bangladesh secures $4.7b in IMF loans